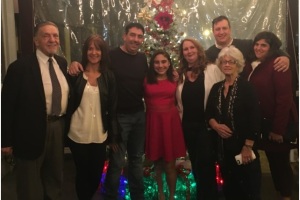 Charles (Charlie) Joseph Constantine (January 11, 1940 – May 28, 2020).  Born in Amsterdam to parents Carmelo and Angeline Constantine.   Charlie grew up on the South Side and worked alongside his father for Mingo’s Delivery.  He married Carole Terenzini in 1964 and had three children, Lynne Marie, Chris, and Damian.  As a young married man, Charlie worked for Boss Linco and attended Fulton Montgomery Community College, receiving an A.S. degree in Computer Science.  His keen analytic mind, coupled with his degree, landed him at the State of NY where he worked for over 25-years as a Systems Analyst.   In 1978, Charlie and family relocated to Wynantskill, N.Y. where the family still resides today.

After retiring from the State of New York, Charlie found himself something of a hot commodity and began a consulting career.  His work took him to North Carolina, Michigan, Virginia, and Tennessee.  People have always been drawn to Charlie; he made friends easily everywhere he went. He was thrilled to be able to introduce his family to the new people and new places.   When we would visit him, we would see that he had, in a very short period, created a new ecosystem of friends and connections.  He developed an affinity for travel and genuinely appreciated the way that living somewhere new could broaden your world view and change your perspective.  Charlie embodied the phrase “there isn’t anyone you couldn’t love once you’ve heard their story.” He was a compassionate, interested listener with a deep reserve of love and validation.  Long after he stopped consulting and came back home for good, he continued to talk about the people he met, what they taught him, and how they changed him.  To Charlie, every person was an opportunity to learn.  He said that sometimes he would get lonely being away from the family, but his family was also the thing that allowed him to take on these adventures.  Knowing that he was tethered to people who loved him so dearly gave him the courage to try new things at a time in his life when most people retire to a comfortable chair and become observers.

Kind.  That is the word everyone uses to describe our beloved husband, father, and Papa.  There are a thousand other adjectives, but Charlie was unfailingly kind to his family, friends, acquaintances, and strangers.   Up until his death, Charlie delivered for Rensselaer County Meals on Wheels, feeling that it was another way to be of service.   In true form, Charlie’s deliveries were slower than most because he created relationships with each person on his route.  Connections were the most important thing to him.

“Charlie always made you feel like you were the most important person in the room. “ Judy P.

Charlie was a scholar, he found inspiration in the words of men and women who had toiled in their lives because they were trying to serve a higher purpose.  Abraham Lincoln was often woven into conversations, especially when one of us found ourselves grappling with problems that seemed to have no solution.   Charlie valued moxie.  He taught his children to be brave in their choices and to make bold moves, to work hard and to meet failure with the same grace as you would success.  Mistakes were to be expected and learned from; they were nothing more than successes waiting to happen.   Charlie knew the value of rest and reflection, too, and would often encourage us to take time to enjoy the lives we have been given.

The most profound, enduring lesson that he taught us was to never stop – never stop planning, dreaming, hoping, growing, and living.  At 80-years old he would sit with his wife and kids and talk about his plans: the next adventure he wanted to have, a new job he would like to try, a new place he wanted to go.   He was optimistic about the future -- something that can be hard to come by these days, but he said it was easy to feel positive when he had his family around him.

Charlie was deeply proud of his family, he lived in a space of constant gratitude for his wife, his kids, his daughters-in-law, and his grandchildren.  He was a doting Papa to Chloe, Adeline, and Luke.  For his grandchildren there was no game he wouldn’t invent, no song he wouldn’t sing, no invitation to play he wouldn’t accept.  His love for his family was boundless – he celebrated every victory we had and buoyed us through every painful struggle.  He would regularly remind each of us about how lucky we were as a group – each different in talents and points-of-view, yet each operating from a core of shared values and connection to each other.

“Papa was exactly the way God wanted him to be.” Chloe, age 14

Charlie was exceedingly funny himself but found his children hilarious. He taught us all that humor could be found in the direst of circumstances and that it was necessary to do so.   He would say often “Life is not for the faint of heart.”  He taught us all to see laughter as glue that held us together through the most joyful and the most awful of times.  Losing our patriarch is now our most awful of times, we are committed to celebrating his life everyday by cherishing each other and honoring his memories by finding laughter through our tears.

“Papa wrote love for me in the clouds.”  Adeline, age 6

Given the current COVID-19 situation, a small private service will be held in the coming week.  The family will be holding a celebration of life will in August 2020 for extended family and friends.  In lieu of flowers, the family asks that you make a donation in Charlie’s name to Hope 7, 596 Pawling Avenue, Troy NY 12180 https://www.hopeseven.com/.