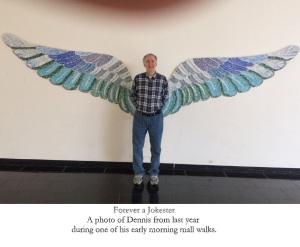 COLONIE, Dennis William Karius, 69, passed peacefully, at his home, on Tuesday, May 26, 2020, following a brief illness.

Dennis was born on May 24, 1951, to the late Robert, and Margaret (Will) Karius.  He graduated from Catholic Central High School and earned a mechanical engineering degree from Rensselaer Polytechnic Institute.  After college he worked for General Electric in Schenectady, Atlas Copco in Voorheesville, in California, and a 2-month assignment in Germany.  In 1984 Dennis opened a business in Guilderland, Computer Services, Inc.  He worked for 27 years at SUNY Albany as an Instructional Support Technician for the Educational Opportunity Program, retiring in 2013.

In 2014 Dennis was diagnosed with early onset Alzheimer.  Although changes in his patterns of thought and communication were obvious, remarkably, he continued his quest toward social justice and participated in an assortment of forums, just a few listed here. President and Treasurer of the NY Capital Area UNA-USA Local Chapter, The Interfaith Alliance of NYS, Bethlehem Neighbors for Peace, Capital District Coalition Against Islamophobia, Poor People's Campaign, Save the Pine Bush, The Circle's Edge, Inc.  Dennis also hosted two Public Access Shows (Citizens for Public Transportation and Solarize the Capital Region), he maintained email listservs for citizens for public transportation, solar panels, and anti-war issues, and was passionate regarding fair and safe voting procedures.

Dennis was an avid walker who enjoyed daily walks in the Crossings of Colonie and local Malls and ate regularly at Chinese Buffets.  As a young boy Dennis taught himself how to play a guitar. He became an accomplished musician and singer who performed in local bands, coffee shops, at events, and open mike nights.  He loved all animals, discriminated against no person, and displayed true empathy for those the world oppressed.  Dennis will be remembered as a gentle, intelligent man whose lifelong dedication to social justice issues was heartfelt and outstanding.

A devout Catholic, Dennis believed there were more similarities than differences between the world’s religions and attended all forms of religious ceremonies.  Survivors include his wife, Maureen (Morrell) Karius, whom he married November 20, 1982; two brothers, Robert (Paula) Karius and Ronald (Carol) Karius, several nieces, nephews, and loving cousins, and his beloved cat Alex.

A special thank you to Dr. John Bashant and the Eddy visiting nurses for their care and compassion given to Dennis in his last days.

Due to the coronavirus pandemic, services performed at The Wynantskill Funeral Home will be private, followed by a burial at St. Jean’s Cemetery of Troy, NY.  A gathering for friends and family will be arranged at a future date.

To plant a tree in memory of Dennis, please visit https://www.americanforests.org/ways-to-give/memorial-gift-trees/ or (https://www.alivingtribute.org/).

To send flowers to the family or plant a tree in memory of Dennis Karius, please visit our floral store.